More FOX News Dirt from Megyn Kelly.  In her new book “Settle for More,” Kelly unloads about what goes on at FOX, the Republican “news” cable channel run for years by CEO Roger Ailes.  Ailes, former top consultant for Nixon, Reagan, Bush, and Giuliani, apparently sexually harassed her for years.  Meanwhile, Trump and Ailes were in constant contact about how to present Trump favorably on FOX.  Aisles instructed all programs to mention at least four times per hour (A) Hillary’s emails; (B) Benghazi.  Trump disliked Kelly and was alarmed that she would interview him.  On the night of the TV debate, Ailes sent a limo for Kelly and the driver insisted they stop for coffee.  An hour later,  Kelly suddenly became violently ill and was throwing up.  Now she is claiming that they drugged her.

Fake News on Google and Facebook.  Speaking of fake news, critics have lashed out at other “news” sources such as Google and Facebook.  They claim that both of them carried phony news in an attempt to sway the election.  Facebook “news” for example spread a false story about Donald Trump being endorsed by the Pope.

Is it OK to Eat Food Off the Floor?    A doctor says yes.    Microbiologists have studied bacteria on all kinds of surfaces and discovered for example that the floor is actually cleaner than the average kitchen counter.  Refrigerator handles are twice as contaminated.  Three times worse is the faucet handle but that is nothing compared to the toilet flush handle.  What’s really bad? The cell phones of health care workers which are right up there with dollar bills.  And then there are gas pump handles, ATM buttons, remote controls, and computer keyboards.  But you have to read the article to see what is the dirtiest of all with 20 million colonies per square inch.

Gene La Rocque, Decorated Veteran Who Condemned Waste of War, Dies at 98.  Admiral LaRocque was a much decorated Navy veteran who spoke out against the wastes of war.  He founded the Center for Defense Information which performed informed opinion about the Pentagon, worked toward averting nuclear war,  and attempted to scrutinize the military-industrial complex.  He will be missed.

Are Supplements Beneficial?  The Dietary Supplement Health and Education Act of 1994 allows the diet supplement industry to market anything they want without evidence that these products are safe or effective.  The result?  A $30 billion dollar a year industry.  Unfortunately, studies show little benefit.

Letters to the Editor: Children and the Trump Effect

On Tuesday at the drinking fountain, my 10-year-old biracial son overheard a white student taunt an Asian student, “If Trump wins today, you’ll be going back to China.” He wasn’t even Chinese. The day before, at my 15-year-old daughter’s school, a cafeteria table full of girls started chanting, “Build the wall!” as she and her African-American and Muslim friends sat silently staring.

Many students have taken to social media with similar language, like “send the minorities back.” I live in New York, not a Southern or rust belt state. I’m not a historian, but this is a very scary moment in time.    MICHELLE CAIOLA,  Mamaroneck, N.Y.

My 10-year-old daughter learned a lot during the election campaign: that most of the time it’s O.K. to lie; that not paying your debts and taxes is just fine; that people who are different are suspect; that having a stranger grope you is no big deal; that reading and preparedness are overrated and that science is a hoax. Also, that it’s O.K. never to admit mistakes; that bullying pays off; and that ugliness, hatred and violence are appropriate responses to disagreement.

This is apparently how more than 60 million Americans feel: enough to elect Donald Trump president. Nevertheless, I will do my best to counter these twisted beliefs and encourage my daughter to treat all people fairly and to choose only leaders who respect the law, embrace difference and give more than they take.  CHRIS BELDEN,   Ridgefield, Conn.

Russian Meddling.  Remember back in July when Trump asked Russia to hack into Hillary’s emails?  Apparently they did so.  The Kremlin also launched a barrage of fake negative news about Hillary.  The Director Homeland Security and the director of national intelligence both said they were confident of Russian interference.  Both the NYT and the LAT recently featured lead editorials about this, but only Democrats are asking for an investigation.  Apparently Pres. Obama knew about this long ago but was reluctant to do anything because it might make it appear that he was trying to help Hillary.  Other U.S. officials may want to play this down for fear that they would look incompetent.  Or perhaps they don’t want anyone remembering  how U.S. intelligence was deeply involved in setting up (and tearing down) dictators in other countries.  Nevertheless, the thought of Russia being able to throw the U.S. election is deeply disturbing.  Why can’t anyone hack the emails of the Trump family? Or Chris Christie, Jeff Sessions, Rudy Giuliani, Newt Gingrich, Steve Bannon, etc.  Can you imagine what vile things would come to light?

Hate Crimes Rise After Trump Election.  A few weeks after the election, the Denver Post featured a front page banner headline Anxious In America .  It described the sudden increase in hate crimes against people of color, gays, Muslims, and even women.  Apparently this is a national trend as racists and their like felt vindicated by the election and viewed it as a green light to engage in hate crimes.  Governor Hickenlooper called for calm and urged Trump and his followers to take steps to soothe fears.

Obama Hands a Gift to Trump.  During the election campaign, Trump repeatedly called the economy a disaster and blamed it on Obama and the Democrats.  Low information Trump supporters actually believed this lie.  Everyone (except Trump supporters) knows that President George W. Bush had the worst economic record of any president since Hoover. He holds the worst performance for GDP growth, stock market performance and job creation of any president of at least the most recent 11 presidents, and is near the bottom of the lists for most other measures. President Bush left office with the S&P 500 being worth 1/3 less than it was when he entered office. The Republicans left the country in a downward spiral and handed Obama a horrible economic record.  Fortunately, Obama was able to turn it around.  See the front page of the NYT Dec. 3:  President Obama is Handing a Strong Economy to his Successor

Trump Makes the World Tilt.  Also during the election campaign, Donald Trump expressed his admiration for Putin and openly encouraged Putin to meddle in the election (which Putin did).  Putin was overjoyed when Trump expressed a desire to weaken the 28 country NATO alliance, the cornerstone of American security and foreign policy efforts since 1949.  The world is getting the message that under Trump the United States will no longer be a great leader.  In the Far East, Vietnam, Malaysia, Thailand, and the Philippines are starting to tilt toward China.  And the recent election in France indicates that Europe is tilting toward Russia French Election Hints at European Tilt Toward Russia (NYT Nov. 30)      Meanwhile, Trump breaches diplomatic protocol and goes out of his way to insult China  or you could read this analysis from Nov. 29 called The End of the Anglo-American World  (Trump is not even in office yet and he is already turning the world upside down.  How much serious damage can he do to our country and the world in 4 (or 8) years?  If you want to spoil your holidays (and maybe the remainder of this century), read Harvard Professor Yascha Mounk’s in the forthcoming issue of the journal Democracy.  He concludes that democracies are not as secure as people think.  According to him, “The warning signs are flashing red.”  Will Trump provide the dynamite to blow up the free world?

What Does ‘Alt-Right’ Really Mean?  When Trump appointed Steve Bannon, champion of white supremacists, to become the chief White House strategist,  the term ‘Alt-Right’ began to appear with alarming frequency.  The term was coined in 2010 by white supremacist leader Richard Spenser as a euphemism for hate groups (Nazis, anti-Semites, anti-Muslim, anti-gay, racists, and even some women haters).  Now there is a backlash and a dispute in the main stream media over what to call this movement.  A raging debate broke out in the Washington Post recently illustrated by this reader who wrote:  “Stop calling them ‘Alt-Right!’  They are racists, white supremicists, and Nazis!”  See: News Outlets Rethink the Usage of ‘Alt-Right” NYT Nov. 29.

H.L Mencken Comments on Donald Trump.  How is that possible?? Mencken died in 1956! Thanks to Lois Rothschild for this gem: 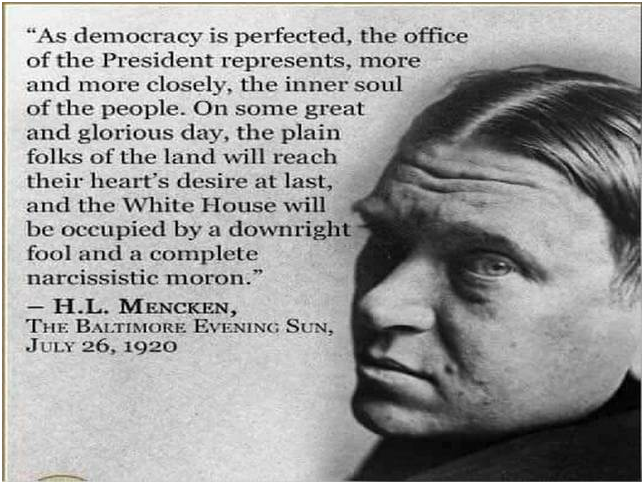 Court Reopens Dispute Over Who Pays for Edison’s Blunders.  The U.S. 9th Circuit Court of Appeals will review the controversial decision by the CPUC to soak taxpayers for the failed San Onofre steam generators.  Citizens’ Oversight has sued to block the decision to have ratepayers charged for 70% of the $4.7 billion costs.  Jeff McDonald wrote a good summer which appeared as a big spread in both the LATimes and the San Diego U-T.   Meanwhile, the WIPP (Waste Isolation Pilot Plant) in New Mexico has still not reopened after fires and explosions there on Feb. 14, 2014.  The tab is over $2 billion and still running making it one of the most expensive nuclear disasters in the U.S. (about the same as the Three Mile Island disaster in 1979).  Think about this when someone says that nuclear is cheap! (They don’t count disasters.)  WIPP is the nation’s only underground nuclear waste repository.  More worrisome is the talk about sticking it to Nevada and forcing the reopening of Yucca Mountain even though Nevada produces no nuclear waste and has been irradiated upside down and backwards by nuclear weapons testing. Republicans are hoping that Trump will get revenge on Harry Reid who is leaving office.  The Yucca  Mountain project was terminated because scientists concluded that there was no way to prevent deep underground radioactive contamination of the water tables (it is too small to hold the nation’s nuclear waste).

Choice Letters to the Editor

To the editor: Congratulations to those of you who voted for President-elect Donald Trump or failed to vote because you weren’t happy with the choices. (“Trump to preside over the richest Cabinet in U.S. history,” Dec. 1)

You didn’t get Hillary Clinton, but here’s what we all got:

But don’t worry. Trump said he wouldn’t be controlled by Wall Street or special interests. He said he owes no favors to anyone. Still, we know he will never fully separate himself or his family from the wealth he has amassed. We know that he will continue to profit from his overseas holdings, whether directly or into the pockets of his children. We know that his own interests could put our country in danger.

How do we know? Because about the only truth Trump has ever uttered is that winning at any cost is all that matters to him. And now that he has been elected, to hell with the rest of us.

We all know sore losers, but President-elect Donald Trump has reflected an unusual form of behavior, that of a sore winner. We try to teach our children to accept defeat with dignity as well as disappointment, and I wonder what they think of our future leader who cannot even bring himself to be gracious in victory.